Over the millions of years this Earth has been in existence most species have learned to better adapt to their environments. It’s amazing to see how some animals have taken elements in their surroundings and used them as tools to make surviving easier. When it comes to birds, many migrate as the weather changers. This gives them greater accessibility to food and ideal habitat for nesting.

But what about the birds that stay around all year long? There are a few birds you may be familiar with that do not migrate. They are often better known as resident birds. 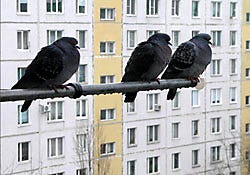 It’s important to understand that nearly every species of bird migrates to some extent. Some birds will only travel to warmer climes when it gets too cold. Others only migrate a few hundred miles.

So with that in mind, consider the “resident bird” concept one that needs to relate to a very specific region.

Doves, for example, are resident birds. They feed on seeds, fruits, and insects and build flimsy nests in shrubbery, trees or on ledges.

Most of us are familiar with the dove’s most prolific family member, the rock pigeon, another resident bird.

If you have ever been to New York City you’re well aware that pigeons do not leave during the winter. This partly because of their willingness to eat human food — either via handouts or out-and-out theft. Just remember that if you feed pigeons — or any bird — you should feed them bird food, not human food.

Still, there is a certain charm to pigeons, as seen in this video:

Categories
Cookies On This Site OK This site uses cookies to improve your user experience. By using this site you agree to these cookies being set. To find out more see our cookies policy.
®2020 Woodstream Corporation. All Rights Reserved.
29 E. King Street, Lancaster, PA 17602