Each year, hummingbirds embark on two migrations – one north and one south. These migratory journeys, which can span hundreds or thousands of miles, require immense preparation and a shocking amount of energy from these small birds - the smallest in the world. Their spring migration north, from South America and Mexico up to Canada, is a solitary journey with the goal of getting to their breeding grounds early enough to claim the best feeding territories. With that sort of pressure, this hummingbird migration can begin as early as February in Mexico and finish in mid-May in Canada and Alaska. The fall southern hummingbird migration follows a similar timeframe. Hummingbirds can set out as early as late July and the last stragglers will cross the southern U.S. border by late October. It’s this amazing cycle of hummingbird migration that can also bring a sudden swarm of activity to hummingbird feeders. Well-maintained and well-stocked hummingbird feeders should expect plenty of new visitors as they try to boost their energy before the next stage of their journey.

Why Do Hummingbirds Migrate?

It is believed that the first hummingbirds developed in South America after arriving from Asia 22-million years ago. Once they spread through South America, a few species began to move to Central America, the Caribbean and eventually mainland North America. By migrating to areas with more abundant food, these little explorers had less competition for food and territory. Of course, the seasonal cooling also drove these species south every fall. This cycle of advancing and retreating with the seasons is the basic foundation of their migratory pattern. There are currently 338 recognized hummingbird species, but only 12-15 will regularly migrate into the United States, and even fewer continue all the way north to Canada. 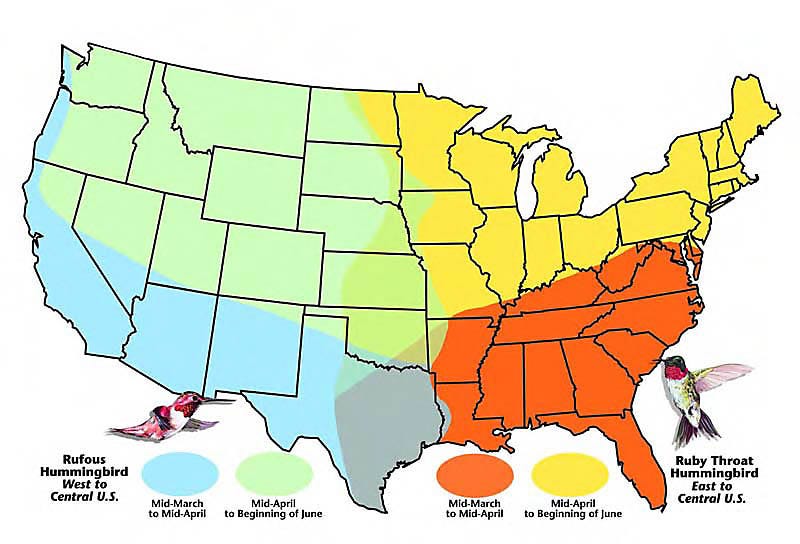 Hummingbirds that Migrate into the US and Canada

The beautiful Anna’s Hummingbird, a hummingbird common to the West Coast, is a special case since it doesn’t really migrate. While some individual Anna's may adopt a temporary territory with a more favorable climate, others will stay in the same area year round. As such, Anna’s Hummingbirds are considered resident birds of the U.S. and Canada.

The majority of Ruby-throated Hummingbirds spend their winters between southern Mexico and northern Panama. Because Ruby-throats are solitary birds, individuals will migrate to any location within this range. Their winters aren’t all sun and fun though. In fact, they spend most of their time preparing for the trip back north. 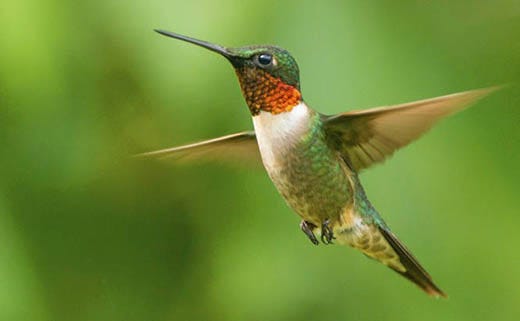 How do Ruby-throated Hummingbirds Migrate?

Ruby-throats do not travel in flocks during hummingbird migration. Instead, each bird follows its own instincts on appropriate departure times and routes. Scientists believe that each hummingbird begins its migration in response to environmental triggers. One trigger is the changing level and angle of sunlight. Another trigger is believed to be a drop in available natural food. As these signals continue to activate, the hummingbird makes its preparations and eventually departs.

On their northward trip, most have reached Mexico’s Yucatan Peninsula by February. In this lush jungle, they begin to feast on insects as they prepare for one of the toughest migrations for any bird. Each year, thousands of Ruby-throated Hummingbirds fly over the open water of the Gulf of Mexico rather than follow the longer shoreline route. These brave little birds will fly non-stop up to 500 miles to reach U.S. shores. It takes approximately 18-22 hours to complete this amazing solitary flight.

Some hummingbirds aren’t strong enough, though, as many oil riggers and fishing boat crews can attest. Every year, exhausted Ruby-throated Hummingbirds take temporary refuge on offshore oil rigs and boats floating in the middle of the Gulf of Mexico. These birds rest a while before bravely launching back into their flight across the open water.

When they return south, Ruby-throated Hummingbirds will follow the same daring migration route in reverse. They’ll charge up their energy reserves in the southern U.S. and then zip across the gulf toward their winter home. That’s two big, non-stop trips each year for Ruby-throats – you have to admire their tenacity!

In preparation for their migration, Ruby-throated Hummingbirds double their weight from 3 grams to over 6 grams prior to departing. They don’t stay pudgy for long, though. In northward migrations, it’ not uncommon for a hummingbird to weigh around 2.5 grams when it reaches U.S. shores!

Their need to fuel up and add the extra weight to their tiny frames is vital. With a heart rate of approximately 1,200 beats per minute while flying and wings that flutter at least 53 times a second, they need some serious energy just to get through the day, much less a non-stop trip of hundreds of miles.

In general, hummingbirds consume up to 50% of their body weight in nectar each day. During their twice-a-year migration, they increase their nectar intake considerably since they have no idea where their next meal will come from.

For fans of hummingbirds, it can be hard to determine the best times to remove feeders in the fall and when to put them back into service in the spring.