How to Kill Wasps

Wasps and hornets can turn a family backyard event, into a painful experience. Getting rid of these annoying insects can be no picnic, but using a product like Safer® Brand Wasp and Hornet aerosol, you can eliminate them on contact.

Below you’ll get information about the different types of wasps, their natural predators, and how to help your customers get rid of them.

What Is a Wasp?

Wasps can be divided into three groups: 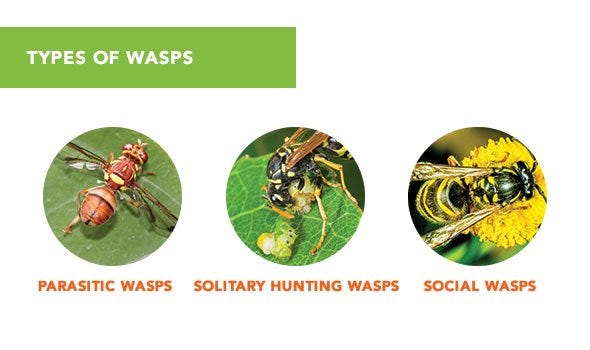 Social wasps from the family Vespidae include hornets, yellow jackets, and umbrella or paper wasps.

Since all three types of wasps look and behave similarly their names are often confused. To help you identify the differences, know there are hornets, consisting of the European hornet, giant hornet and bald-faced hornet, and wasps, which include yellow jackets and paper wasps.

Differences Between Wasps and Hornets

Though hornets are a type of wasp, they still have slightly different characteristics from other wasps. In most cases, wasps are smaller than hornets. A wasp grows to be about 1 inch while hornets can grow to 1.5 inches.

Yellow jackets are often one of the most common wasps that visit picnics and other populated areas during the warmer months. They measure about ½ inchesand are generally yellow and black. Paper wasps or umbrella wasps are 3/4 inches to 1 inch long with smoky black wings.

Wasps also have more color variations than hornets, which are usually black, white or a reddish brown. Many wasps have yellow on their bodies, which hornets usually do not. 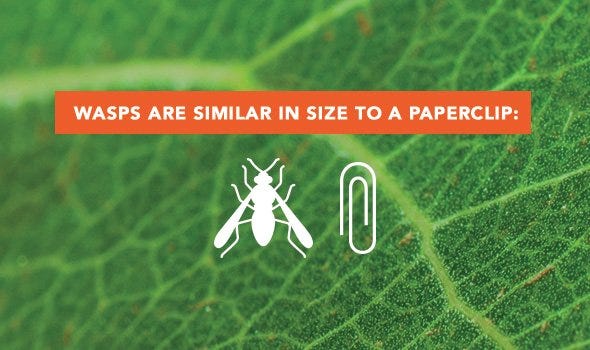 Some other differentiating characteristics include:

Depending on what species of hornet or wasp your customer has, these insects may or may not be aggressive. However, the problem with these pests is that they tend to build their nests in the same areas where people like to congregate. This poses a mild threat, as wasps and hornets can pack a powerful punch when they sting — and they can also sting multiple times. 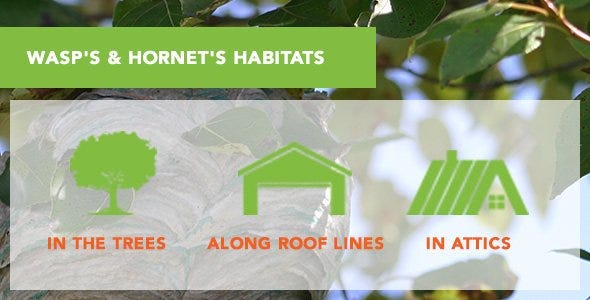 Wasps and hornets can be found throughout North America in meadows, orchards, woodlands, playgrounds, cemeteries, urban landscapes and suburban backyards. They vary in their nesting preferences.

Although they all chew wood pulp to build their nests, yellow jackets generally locate their nests below the ground surface.

Hornets and other wasps build their large nests up in the trees, under eaves, along roof lines, in attics, or any other space that might be desirable.

While most hornet species are not normally aggressive, they will all become aggressive if their nest is disturbed. If wasps decide they like the same outdoor space and food as your customers do, problems can also arise.

Quick Wasp & Hornet Solutions: Advise the use of Safer® Brand Deluxe Yellow Jacket Traps to trap of wasps and hornets. To destroy a nest, use Safer® Brand Wasp and Hornet Killer.

How to Distinguish Between a Bee and a Wasp

Before your customers gather supplies to get rid of wasps and hornets, first make sure they aren’t actually trying get rid of honeybees, which are entirely different insects. Customers should follow these steps to determine whether they have bees or wasps:

Benefits of Honeybees, Wasps and Hornets

If your customer has a problem with honeybees, try not to let them destroy the colony. For one thing, bees are generally non-aggressive. More importantly, they are beneficial because they help to pollinate flowers and plants. They also make honey. In fact, they are expert pollinators whose skills are very likely needed by farmers in your area. Instead of selling them supplies to destroy them and their hive, help them get in contact with a local beekeeper who may remove the colony for free.

Though wasps and hornets may be territorial and sting, they’re also considered beneficial. Believe it or not, they actually can help eliminate other insects from a yard or garden.

Paper wasps hunt caterpillars and other insect larvae. Hornets feed on an array of bugs. Both will take live insects back to their nests to feed to their young.

That being said, it’s understandable that a person takes steps to remove wasp and hornet nests from their property. They often invade spaces made for people and can truly pose a threat to people and pets.

Wasp or Hornet? Pretty Much the Same Thing

Since the behaviors and life cycles of wasps and hornets are so similar we’ll be referencing both as wasps for the rest of this page and will only specify if the information is different for a hornet.

Wasp colonies follow regular reproduction cycles, and the time of year can indicate what your customer is dealing with when they come asking for help.

What Are the Natural Predators of Wasps?

Birds and other insects eat wasps. Often, these animals and insects find the wasp larvae more appealing than the adults. However, there are many insects that won’t pass up an opportunity for a meal, even if it means feasting on an adult wasp.

Some specific insects and birds that prey on wasps include:

Other bird species, including blue birds, woodpeckers, sparrows and wrens may eat wasps occasionally. They don’t tend to explicitly pursue them, however, especially if it involves being close to the nest. How Can These Natural Predators Be Attracted to an Area?

Birds that eat wasps may be attracted to a yard through the use of Perky-Pet® bird feeders and Perky-Pet® bird waterers. Place these bird attractants in the yard at any time throughout the year. The ideal time for attracting birds in hopes they will also go after the wasps would be during the late spring and summer when these insects emerge and are active.

How to Kill Wasps

While natural wasp control can be beneficial, a quick elimination may be required, especially when kids or pets are involved. When looking for ways to kill wasps or hornets, it’s important to advise the use natural or organic control methods. Chemical insecticides often leave residual effects on the environment and can even be toxic for humans.

Wasp traps such as the Safer® Brand Deluxe Yellow Jacket Trap are often effective at getting rid of wasps. The wasps go in after the bait, but they won’t be able to figure out how to escape.

Victor® Poison Free® Yellow Jacket & Flying Insect Reusable Trap is another option and effective in all geographic regions. In fact, tell customers it’s perfect to take on camping trips or to use cookouts. Let customers know that it could take 24 hours to fully lure wasps to the trap.

If your customers would rather spray the nest, aerosols containing pyrethrin, d-limonene, palmarosa oil or mint oil, such as Safer® Brand Wasp and Hornet Killer, are a great way to get rid of wasps. Advise your customers to:

Safer® Brand brings you a variety of effective insect control products that are gentler on the environment! Most of them proudly display the OMRI Listed® organic seal and comply for use in organic gardening!