How Many Wire Strands Do I Need? - 7 Rules for Electric Fencing

A common question asked by farmers and ranchers is “how many strands of electric fence wire do I need?”

The answer may surprise your customers: The number of strands required for electric fencing isn’t nearly as important as the location and the spacing of the electrified wires.

Set one hot wire set at the typical nose height of the animal(s) inside the fence. Tell your customers to base the strand height by visualizing where the animal’s nose level while it is walking.

Further, they must set the shocking line so it touches the animal in front of its eyes (usually the nose). This helps the animal know to back up when it is shocked.

If different sized animals are penned inside the same electric fence, then a nose-level electrified strand is needed for every animal type. For example, consider the spacing needs of calves and full-grown cattle.

Set an electrified grazing strand at the nose level while the animal is feeding. This strand is located near to the ground. It’s placed at ground level, near where the animals’ heads are located as they graze.

If livestock are trained to the electric fence, a farm manager can usually get by with fewer hot wires. In fact, for many livestock held on temporary, interior paddocks, one line is often sufficient.

Still training is needed and it’s fairly simple. Most animals find the touch of an electric fence so jarring that they aren’t eager for it to happen again. Once they recognize the fence line as the source of the shock, they’ll learn to keep clear of it.

Tell your customers to look at the size of one of their animal’s heads. This height – the distance between the top to the bottom of the animal’s head – shows the perfect spacing for fence wires.

During installation, keep this distance in mind and space the hot strands accordingly. By ensuring livestock can’t get their head through the fence, it’s impossible for them to breach the entire fence.

In many parts of North America, even domestic livestock are under the threat of predation. Bears, wolves and coyotes are the obvious culprits to large livestock. Other predators, including foxes, raccoons, martins, weasels and birds of prey, pose a threat to smaller livestock and poultry. Remember that aside from fencing, Havahart® traps are also helpful to remove smaller predators.

Ranchers and farmers have found that electric fencing can offer two types of protection. First, a fence keeps livestock from wandering away or into dangerous areas. Secondly, it can keep predators and other unwanted wildlife from coming into a pasture.

After making their initial plan, they may want to add lines to deter predators, which will require hot wires very close to the ground (since they may dig under a fence) and then tightening the space between all the other wires (adding a line between each “head height” set is a good guide).

This is the most difficult rule to take into account as your customers set up a fence line. This is because installing electric fencing is an art rather than a science. Advise them to think creatively when building their electric fence because there are so many factors involved.

Your customers can expect to encounter unexpected obstacles that put their plan into question. Obstacles can include difficult terrain, water sources or trees. They may also run into problems with dislodged fence posts, snapped lines and power losses.

To be prepared for these unexpected times, let your customers know to keep a few common fence tools on hand at all times, including a Zareba® multi-purpose fence tool (hammers, cuts, pries, twists) and a Zareba® fence tester (measures line voltage). It’s also good to keep a few spare electric fence insulators and a length of line or poly-fence handy. 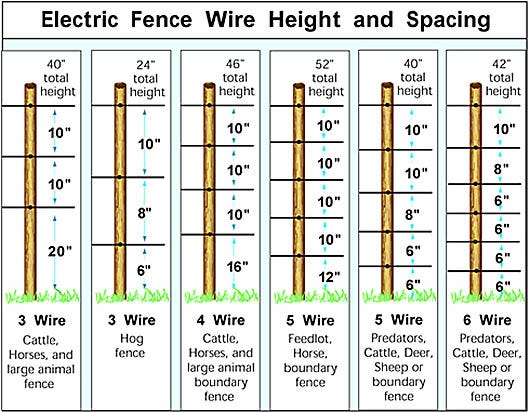